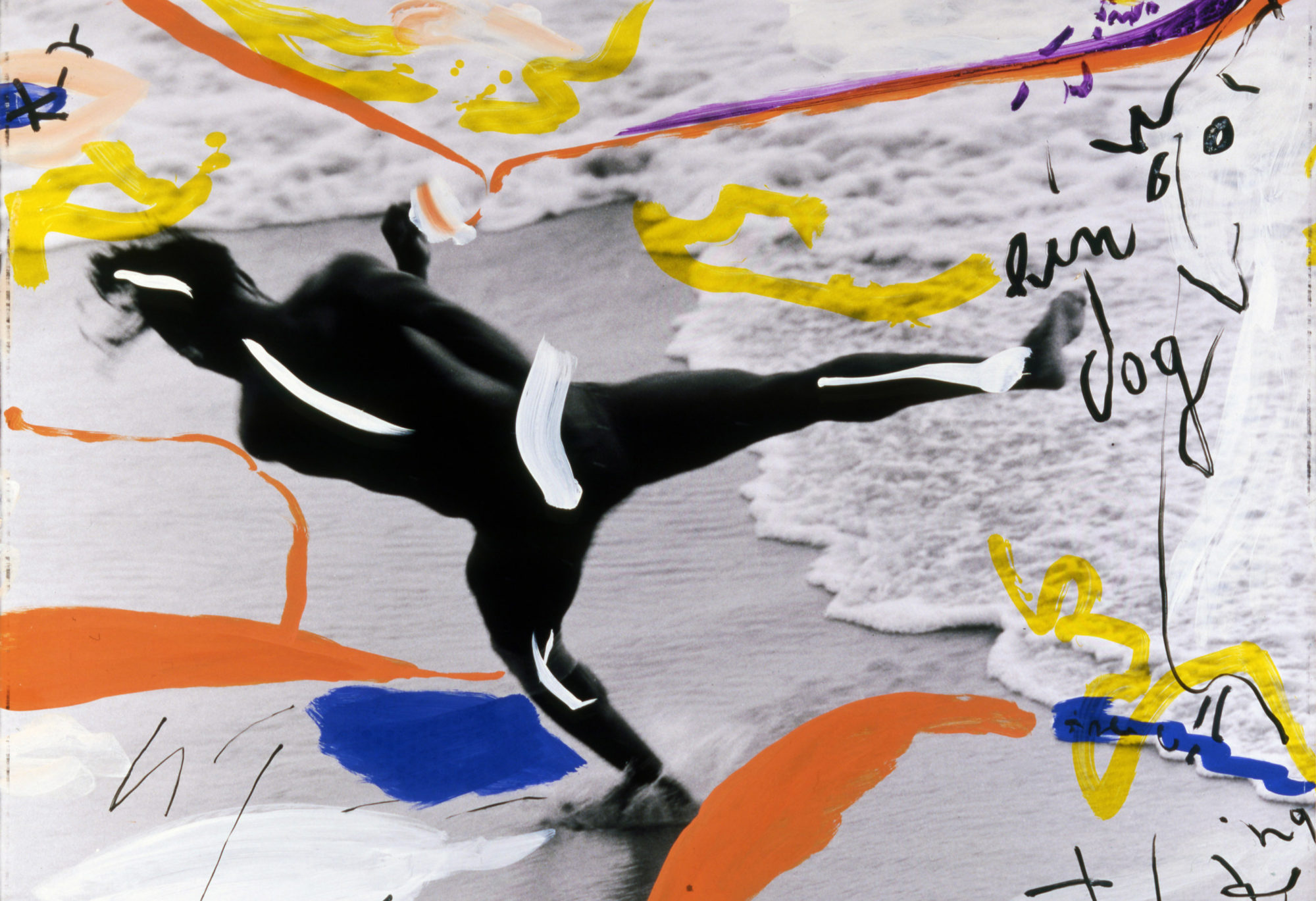 I paint on the brink of death, as if forced to something else outside. A sort of pressure or an impulse. An urgency which I neither master nor control. When an idea emerges and I start thinking about it, the picture is finished.

A world develops with its signs, perspectives, vistas, its boundless other places: profiles from another era, chance encounters, dialogues, liaisons which, on the final stage of their journey, require me to be as indifferent as an off-duty ticket collector on a station platform, who turns a blind eye to whatever comes off the train. Yet, who knows what the motley stream of childish joys, old men’s whims and obsessions will be faced with when they arrive?

Where do I start a painting? Where does a world begin? I paint. I follow this running line, that cheek imprinted with a kiss, the trace of another character that my brush takes by surprise, listens to. Painting in the act. A blot becomes a city, a procession, a fire, a desert, a rooftop, a mother’s breast, an eyelid opening.

My painting comes from the guts, the guts of a gladiator at grips with the beast, facing an arena crowded with thousands of people, whose dreams and desires, families, ugliness and innocence, I can sense.

I paint in the heat of the moment; often it’s a story, but told simply, without fuss. I paint through other people, as one might say when one’s heart is overflowing or desperately empty: I am leaving, travelling by the high road wherever my feet lead me. I do not stop at the edge of the canvas. A painting is not brought to a halt by “The End” like a film. I said that my paintings do not have a beginning. I would like them also to have no meaning. For them to be hung upside down, or torn to pieces like holy bread, exhibited in the fairground, shared out and eaten! I had to endure a childhood where people only said that things where fine, or going badly or could be better. “Things”—what things? On the canvas there is no barrier between words and what they say: they are firstly shapes, forms, freedoms—freedoms I have taken. I take “things” by the scruff of the neck and throw them on to the canvas. Sometimes I am gentler, I marry them off with some character so they will make friends at once; because of that paunch, or the nonchalant air, or the half-formed grimace I draw for them: I want “things” to go hand in hand.

My painting: a house on stilts, clouds on the horizon, a shore where the sea rolls its waves on to silent stones, women’s heads spiky with hair-curlers to make the child I was then believe that every woman is a queen, while he was in fact searching underneath for the secrets that pinned them mute to their deckchairs, instead of clasping me breathless in their arms.

I paint to the point of exploding. I paint like lifting a veil. I paint as if I were not painting: spurts of colour, shapes and lines, unknown movements (though, rest assured, some are recognisable). I do not know the rules of painting, but who knows the true measure of sorrow? The colour of God, where is up and where is down? Let me just say that I feel the mood of the canvas, that I know what the weather is outside, and am familiar with the mouldy smell of the cellar.

Unlike the Catholics, I do not have the right to repent. Everything is pre-ordained. The canvas in front of me, or often at my feet, testifies to that. Yes, I am there, right there, full of life, but what life? The canvas, as in the poem, answers: I’m the one who knows! An avalanche of blue, Viento del sur, sings Federico García Lorca. Then follows a pharaoh’s mask, but dug up from whose memory? I have to stop, and quickly, if I want the picture to go on without me. That is when it speaks.

I have been a painter for a hundred years.

Whenever I have to write about what I have done, a novel, a play, photography, painting this time, a dream comes to me before I start.

My pictures are being moved. They are passed from hand to hand and there is a man—or woman—who stacks them up like huge playing cards, or maps, setting off for an exhibition on the other side of the ocean.

I need to find the words to tell this unknown helper what I paint. He can clearly see that my paintings are not portraits, or landscapes or calligraphy, or a mixture of all three. There is expression in them. He sees that I treat these canvases, and him too, with consideration. Respect? Don’t let’s exaggerate. No more respect than I would have for dynamite, if I made it at home.

But in this dream I can only talk with flecks of colour, strokes of blue or black. There is no way I can talk to him except through the movements the brush makes, and each syllable is part of the picture. I understand then what madness is: just a different balance. It all makes sense. It is right. Justifiable. Self-evident and logical like the sentence: painting only speaks its own language.

I plunge into it when I paint. Painting dictates its own life, throws out bridges or snatches them from under our feet as we go forward, embracing everything: an exactitude as much as the spirit, a story as much as a small detail; the past as much as what comes after.

This exchange with my “helper” will not happen: the brush, the colour, the gesture have made the canvas drunk—it talks to itself, waves a hand, and goes off alone: painting only speaks its own language.

If by chance the painting—I am the painting, as you have already guessed—half opened And That’s the Truth by Pirandello, it could say, Thank you, I know. Elena: I’m going. Or, just as well: Don’t be afraid. I’ll be back by this evening without fail.

Does my inspiration come from chance? It collides with and is shaped by the immensity of these worlds which confuse us, which we brush against and pretend to dominate before they bury us. This passage from one universe to another, this confrontation, this chaos, these sudden terrors, sensations, emotions and the colours which sustain them, try to tell a story, or forget one; but what does my brush, my gesture, sweep aside, carry away or leave behind?


This text was written by François-Marie Banier,  on the occasion of the release of the exhibition catalog Fotos y pinturas which took place at Centro Cultural Recoleta in Buenos Aires from the 17th of april until the 21th of may 2000.